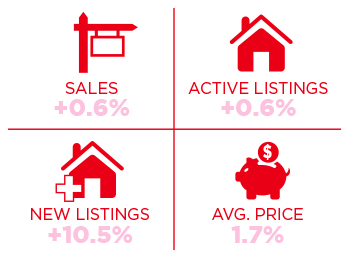 SALES COMMENTARY:
Sales for January of this year, started out very similar to those of January in 2018. Our Forecast last month said that ‘what you saw in 2018 is what you will get in 2019’ and the first numbers seem to support that. Sales and ‘active’ listings on TREB were unchanged from those of a year ago. While real estate sales are seasonal, we have also made the case that sales are ‘weather dependent’. Extreme cold and snow reduce people’s activities to just work and home. Other retailers report the same type of behaviour. Hence January sales are not out of line.But what everyone is waiting for is the size and impact of a ’Spring Market’. Last year we did not experience one. How we measure a Spring market is the difference in sales from January to the peak month. In 2018, the jump from January to June sales was just over double. Normally, this jump should be closer to three times. The graph below shows both the peak month and sales number for the year vs. January of that year. Outside of 2017, January sales for 2019 are in line with most years. The question is: will we peak at 8,000 or 11,000 in sales?Turning to the condo market, condo sales were slightly lower than for January of 2018. They were higher in the 905 area (+7%) but lower in 416 (-6%). Condos are usually the entry point for first-time buyers. But with the ‘stress test’ forcing buyers to qualify 2 points higher than the going five-year fixed rate, it has forced many buyers to focus on lower priced condos in the 905 (a trend we forecasted). If you look specifically at the downtown condo market, sales were 21% lower than for January of last year. A second explanation is that this market was the strongest market for the first six months of 2018. On the other hand, condo sales in Humber Bay, although a smaller market, were up by 18%. Listing inventory is almost unchanged from a year ago. ‘New’ listings for January are actually lower in total than ‘active’ listings at month’s end. This is another factor which suggests that prices will probably increase from current levels over the year.
January to Peak Sales Month for the Year 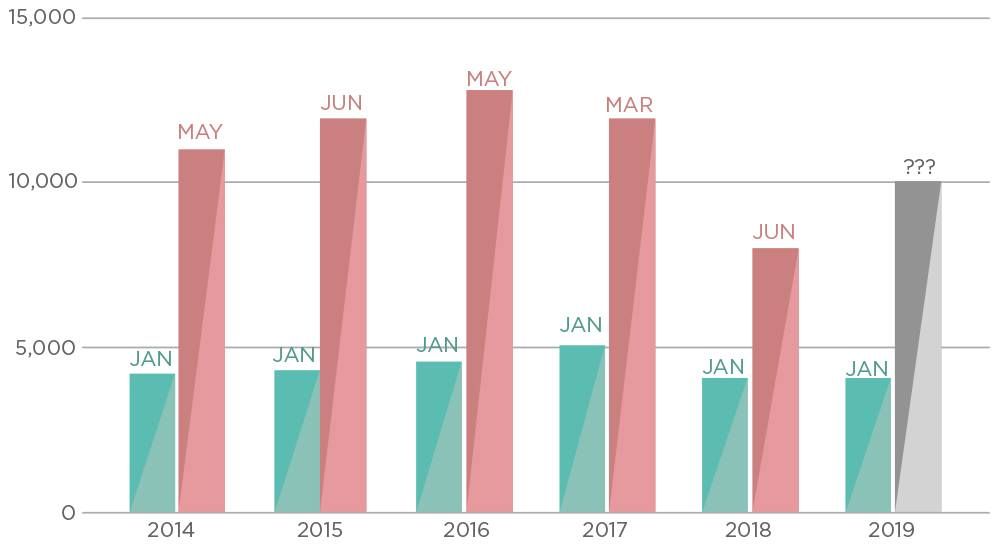 This graph compares January sales to the peak month of the same year. We measure the Spring market by the difference in sales from January to the peak month. Normally, this jump is 3x the sales from January.
RENTAL COMMENTARY:
In January, 954 condo units were leased downtown. This compares to 821 units last year. There were 70 studios leased last month at an average rent of $1800 – unchanged from year-end. The largest portion of rentals (just over 600) was for one-bedroom units. The range is from over $2300 to $2900 per month, depending on a den, parking, and washrooms. The parking and den premiums are fairly fixed at $100-150 per month each. What we did examine was the premium to go from one washroom to two, with a one-bedroom rental. That premium was $400 per month. It tells us that more people are sharing rental units at these prices and a second bathroom is key. The two-bedroom market has settled into the $2900-3300 range. Parking with these larger units is of prime importance and pushes rents to the high end. In October, the two-bedroom market started at $2800. The three-bedroom market recorded 40 leases last month, and prices are averaging $4500 per month. A word of caution for landlords: we are seeing almost 30% of all rental applications with errors regarding job references, income, and previous landlords. We would also caution that when applicants pull their own credit bureau, they are always significantly higher than when a third party does it. Landlords should also be aware that a tenant cannot be evicted for falsifying a rental application. It’s not easy being a landlord.
TREB Affordability Indicator